Currier Luccukchefka is an IS Representative Candidate for Russia, and one of the exclusive characters in the Infinite Stratos: Archetype Breaker game.

Currier appears as an eccentric normal child carrying a teddy bear called “Puu-chan” and looking up to her imaginary friend named "Ruu-chan".

She looks up to her "imaginary friend" to make decisions.

After the death of her parents, Currier was raised in a special orphanage built to train IS pilots.

For uncompiled reasons, Currier's IS adaptability is S. 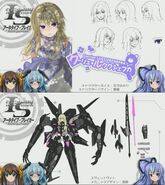 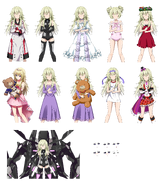 Retrieved from "https://infinite-stratos.fandom.com/wiki/Currier_Luccukchefka?oldid=19407"
Community content is available under CC-BY-SA unless otherwise noted.