Infinite Stratos Wiki
Register
Don't have an account?
Sign In
Advertisement
in: Characters, Female Character, IS Academy Students,
and 3 more

Honne Nohotoke (布仏 本音, Nohotoke Honne?), affectionately called "Nohohon-san" by others, is a supporting character in the Infinite Stratos series. She is a 1st year student at the IS Academy, one of Ichika Orimura's classmates in Class One, and a member of the Student Council with Utsuho Nohotoke (Honne's older sister).

Honne has sleepy yellow eyes and pink shoulder-length hair, most of which hang free, the exception being two small pigtails on either side of her head held in place by yellow fox-themed hair ties. Her appearance is usually marked by her modified IS uniform with long sleeves which obscure her hands and baggy clothes with long skirt which cover her to her calfs and short sweeping socks. However, her long sleeves are not always present as her yellow skin-tight suit used during IS exercises which lacks sleeves. Underneath her baggy clothes, Honne has a unexpectedly curvaceous and well-endowed figure, having bigger breast than even Houki and having the body of a fashion model.

She is presented as a cute, childish, happy and enthusiastic girl. Honne loves eating snacks and others sweet thing like cakes. She is an airhead and very forward, always saying what she means. However, Honne can show flashes of seriousness once in a while, which surprise even the Sarashiki sisters who have known her since childhood. Honne is also hightly sensitive about feelings of others.

She doesn't own a personal IS. Like her older sister, Honne is a member of the maintenance division and is considered to be one of their aces. Honne specialist in construction.

Currently, nothing is known about her history. But she is shown to be Kanzashi Sarashiki's personal maid.

Episode 1: "My Classmates are All Girls"

Honne is first introduced to the Infinite Stratos series as one of Ichika's classmates. She commented on Ichika's big appetite in the morning. When Ichika asked about if eating a small meal in the morning is enough for her, she replied that she eats enough snacks.

During a recess, Ichika invites Honne and her two friends to eat with him and Houki Shinonono. However, after witnessing Houki putting Ichika to the ground, they faded away.

Episode 3: "The Transfer Student is my Second Childhood Friend"

Honne was there to witness Ichika crashing on the ground during an IS practice.

Later, Honne was part of the Class Rep party for Ichika, even posing beside him for the event's picture.

Honne is seen with the class playing volleyball at the seaside school. Unlike the other girls, Honne wore a mascot-like suit. She also wanted to play walking watchtower when seeing Lingyin jump on Ichika. 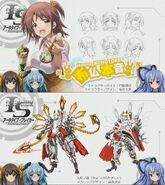 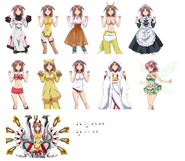