Luanyin Huang is the IS Representative Cadet for Taiwan, and one of the exclusive characters in the Infinite Stratos: Archetype Breaker game.

Due to being Lingyin Huang's cousin, Luanyin personality is also similar in tendencies to be short-tempered and impertinent.

Luanyin Huang is Ling's cousin who is one year younger but a prodigy, being able to skip a grade and becoming the IS Representative Candidate for Taiwan while in the middle school division. 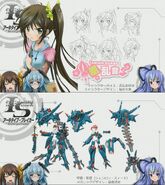 Retrieved from "https://infinite-stratos.fandom.com/wiki/Luanyin_Huang?oldid=19540"
Community content is available under CC-BY-SA unless otherwise noted.