Rorentsuine Laurent di Fillney is an IS Represenatative Cadet for the Netherlands, and one of the exclusive characters in the Infinite Stratos: Archetype Breaker game.

While Rolan appears feminine, she has a short-hair style incontrast to her boyish appearance.

Rolan is the Holland Representative cadet with a homosexual preference for girls and is rumored to have 99 girlfriends. She falls in love with Houki at first sight and becomes determined to make Houki her hundredth, thus making a personal rivalry with Ichika. At the Blooming Girl Arts Festival, Rolan's overexcitement over Houki's model appearance overloaded her IS systems making the unit out of control until Ichika saved her. 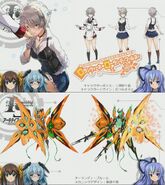