It is Close Quarters Combat (CQC) unit with designs that mirror the Byakushiki in its deployed form. The unit is covered in platinum armor resembling a medieval knight (thus earning the nickname "White Knight"), and has a helmet-styled Hyper Sensor prototype with a visor to protect the pilot's identity. The White Knight was made with Core Number 001. It disappeared after the "White Knight incident" and had not resurfaced since then.

Weapon wise, it has a giant broad-sword that took down 1221 missiles, and a large charged particle gun to destroy the remaining missiles.

As for its abilities, what is known is that it has an energy barrier to handle all the modern-day weaponry and is capable of travelling at supersonic speeds that could make jet fighter pilots pass out (the G-forces incurred are way more than they can handle).

When an unknown hacker hacked multiple military computers to send 2341 missiles to Japan (most likely Tabane Shinonono as noted by Chifuyu Orimura), the White Knight appeared and neutralized the threat. Soon the other countries sent out their armies to try and capture or destroy the unit, only to have them bested by a single unit. The White Knight would then disappear from the world, never to be seen again, while leaving behind a legacy that came to be called the "White Knight Incident", causing the entire world to impose laws about the usage of IS.

In Volume 10, Shirokishi takes control of Ichika when Madoka Orimura was about to finish him off, transforming Byakushiki transformed into the Shirokishi IS in order to protect him. Despite Madoka's new IS, the Kurokishi still having the advantage in spec, Shirokishi is able to overpower her but is prevented from finishing her off by Squall Meusel. The Shirokishi then process to battle the rest of the 1st year personal IS pilots (Houki, Cecilia, Lingyin, Charlotte, Laura and Kanzashi) when they come to see what had happened to Ichika. Despite being 6 to 1, Shirokishi was able to hold it own against them until Maya Yamada arrives with her personal IS and defeats it. 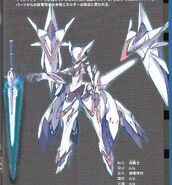 Retrieved from "https://infinite-stratos.fandom.com/wiki/Shirokishi?oldid=19214"
Community content is available under CC-BY-SA unless otherwise noted.