Silent Zephyrus is a 3rd generation IS developed in England that was stolen by Phantom Task and is currently piloted by M. Its basically an improved version of Blue Tears. It was later modified by Tabane into Kurokishi

It is a prototype frame based on Cecilia's Blue Tears, but more advanced than the former. It was formerly the property of England before it was stolen.

Being more advanced than its predecessor, the Silent Zephyrus boasts superior agility and has 6 shield bits alongside its offensive bits. The controls for the bits alone are difficult enough to deal with, which surprised Cecilia when confronted with the unit the first time, since she took a long time to master her own (in the novel she mentions that M has mastered some unique abilities of the bits Cecilia herself hadn't yet mastered until the Cannonball Fast battle).

In addition to the bits, it is equipped with a high-energy rifle that has a bayonet attachment. 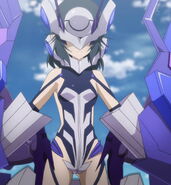 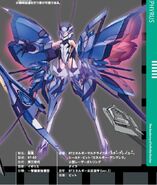 Retrieved from "https://infinite-stratos.fandom.com/wiki/Silent_Zephyrs?oldid=20766"
Community content is available under CC-BY-SA unless otherwise noted.