Velvet Hell is an IS Representative Cadet for Greece, and one of the exclusive characters in the Infinite Stratos: Archetype Breaker game.

Velvet appears with an asymmetrical diverse color theme of red and blue in contract with her IS. Her biological appearance is primary with yellow-green eyes, long red hair reaching the knees, blue-framed glasses, and white-snow skin.

On the outside, Velvet is a lonely and ruthless person who does not want to be involved with others more than necessary. In private, she has a fondness for cute things like children and animals thus tends to be protective around Currier.

A 3rd-year student and current representative cadet of Greece after Forte's betrayal to Phantom Task. 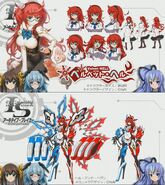 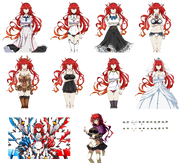 Retrieved from "https://infinite-stratos.fandom.com/wiki/Velvet_Hell?oldid=19503"
Community content is available under CC-BY-SA unless otherwise noted.